This week I debut my 50th role as Athanaël in Thaïs. Before I enter any final week of rehearsals (or tech week) of a vocally substantial role, I do this one thing in order to sing my best. Lots of opera singers knowingly do this, but there’s a real science and necessity to it and it’s time to dish out my method.

So, what every opera singer needs the week before opening night is…

Rehearsals leading up to an opening night can add up, and it’s easy to oversing one or two. The goal is to sing your best at opening night so without having a game plan, the rehearsals might get the best of you. Putting a vocal game plan in place will help avoid any unnecessary vocal fatigue that may occur from oversinging on those nights leading up to the show.

As most people know, opera is the Olympics of singing. It’s an athletic feat to sing over an orchestra and choir for 3 hours. If I, Lucas Meachem, swam for 20 minutes straight, I would drown from exhaustion. However, if I was Michael Phelps who has trained himself to swim for a long time I’d be just fine. Opera singers are no different than Olympic athletes: they train their voices to withstand singing for a long time.

These days, some opera companies—because of high costs—are pressured to schedule final week rehearsals back to back to back because of venue rentals or orchestra fees. So, as a singer who must deliver an exceptional opening night but get through an intensive rehearsal process, you have to be smarter than the schedule.

Everyone has their own game plan and it’s created through trial and error—all with the goal of longevity. I tried lots of things out when I was young and made mistakes like not warming up enough or warming up too much. What’s important when making those mistakes is to become self-aware and ask yourself the important questions about what worked and what didn’t.

The first step in my personal process is to get my hands on the Master Schedule when I first arrive at a new gig. I look for any “speed bumps” along the way, such as two orchestra rehearsals back to back during tech week at which I’m expected to sing out.

After looking ahead, I approach the conductor that first week (this is very important to do that first week because things get stressful for everyone later on in the rehearsal process) and have a conversation. I usually say something like, “It’s going to be very difficult for me to sing the full-length opera back to back a few days before opening night. I want to do my best work here and in order to do so, I’d really like to take it easy for one of those rehearsals. What do you think?”

If he/she is worth their salt, they’re going to have already seen this situation and understand what you are asking about. Most conductors are really receptive to this conversation and will tell you to save your voice for the big rehearsals (sitzprobe and final dress) and most importantly, opening night.

Keep in mind that your days off from singing are not completely vocal free. Warm-up to your mid-point so that when you’re back full swing into singing, it’s not a surprise for your cords. It’s like a muscle that needs to be exercised so keep at it. I do lip trills and breathing exercises on my days off.

Even if a role isn’t vocally taxing and the writing is dramatically demanding, a game plan still helps. For instance, Don Giovanni is not a vocally challenging role for me but I get so carried away with the intensity of the drama that I sometimes feel extra tired afterward. It’s also really long! Smaller roles like Benoit, Masetto, Maddalena, etc. shouldn’t need a game plan since you’re not usually tired after such a short sing.

Here is my opera schedule for this week and my game plan: 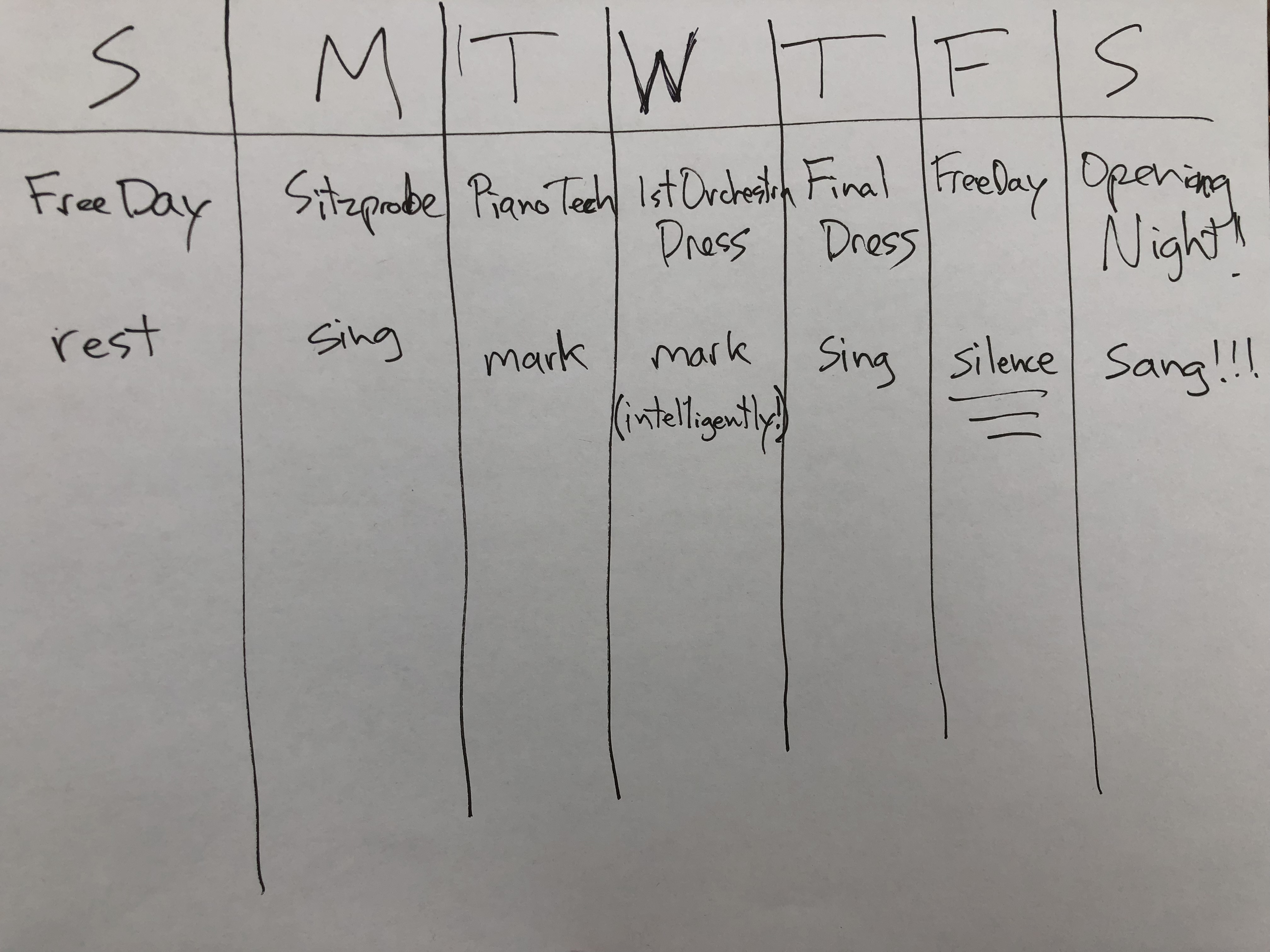 Know when to shine in the rehearsal process. Mostly because you can’t be on point every hour for weeks on end so pick your moments to show the goods.

It’s standard practice to sing the very first day of rehearsal, the sitzprobe (first run-through with orchestra), all rehearsals with orchestra, and most importantly the final dress rehearsal. Bring your ultimate badass-ery to those rehearsals and do your absolute best. You should be able to sing the show all the way through before you arrive for rehearsal, so the preparation must have already happened—you just have to be smart about WHEN to deliver by pacing yourself.

On the other hand, take the piano tech for what it is: a rehearsal for the production team and don’t sing. It’s not about you. Plus, the pianist is accompanying that night so whatever sound you’re creating won’t have an accurate balance. Go ahead and try out a few high or low notes, or sing from any awkward positions on stage (lying down or singing far upstage) but keep in mind that it won’t be exactly like the final product. Save your voice!

Understand that rehearsals are important for you but also for the company to hear you sing. Members of the administration team don’t attend all the rehearsals, so these few important rehearsals are their chances to alleviate any concerns they may have about hiring you before opening night. It’s a little harsh but true. Take it as an opportunity, not as a test.

I could write a whole blog post about marking! Marking is your saving grace during tech week. One thing to keep in mind while marking is that it is a good time to practice phrasing, diction, and expression without having to give so much. You can really find your dramatic pacing during these times.

Marking is an art in and of itself: learning when to go down the octave, when to flip into falsetto, etc. If I had to give one piece of advice while marking it would be to always keep the point of your sound in a forward place.

You have to be an intelligent singing actor. You can mark your voice but never mark the acting.

Keep Maestro In The Know

The most difficult thing as an opera singer, in my experience, is working with a conductor who isn’t understanding towards this process and urges you to sing out every rehearsal leading up to a show. It doesn’t happen often but it does happen.

It’s standard across the board that opera singers need time off between rehearsals and performances to rest their voices, so it’s especially hard when working with someone who isn’t sympathetic to your process.

When I have that initial conversation with the conductor, I also like to add:

“I’m happy to sing any specific notes, my high notes for balance or ensemble parts that need to come together, but for the most part I want to mark that rehearsal.”

This goes far with conductors because they have it hard too, and it shows you’re sympathetic to his/her needs, as well as your own. #TeamMentality

I’ve been really lucky here at Minnesota Opera. My conductor for my first Thaïs, Christopher Franklin, has been very understanding of my game plan because 1. He’s a smart cookie 2. I communicated with him from day one. Most conductors appreciate communication so they have fewer surprises down the road.

For younger singers, I urge you to gather the strength to have that conversation with the conductor. Like most young singers, I was timid to approach the conductor during a show. After some time though, I realized it actually made me look good when I’d show him/her that I was prepared and thinking ahead. For young singers, I’d suggest using a line like this:

“I’m worried about these two rehearsals that are so close together and that I won’t have enough stamina to get to opening night.”

For opera singers who have already implemented a game plan into their playbook, I’d say, stick to it. Sometimes, the music can whisk you away and in the moment, you want to belt out that high note or go for that coloratura: just be careful and remember to keep your pace nice and steady. I’m super guilty of this!

If a singer had no game plan, they’d make it easier to wear themselves out during tech week and their opening night could potentially suffer. It’s all about getting your voice to be dependable day in and day out and you do that by working at it. Just like anything else, it’s a process. I’ve developed and honed my own game plan after many years of doing this.

It’s like that first work-out session after the Christmas holidays. Your body has changed and you’re not in the zone anymore. You need to find that sweet spot of vocal fitness and cultivate that awareness. Work hard in rehearsals, be smart about your vocal stamina, and when the time comes, deliver the goods!

0 thoughts on “What Every Opera Singer Needs Before Opening Night”