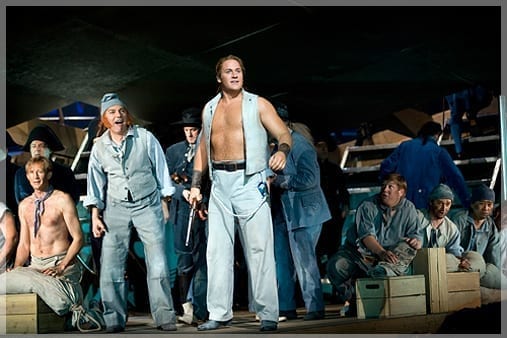 Perhaps these answers are that of a typical baritone but man are they goodies!

These are the roles I never tire of performing, and that I am excited about every time I set foot on stage to sing them.

What I love about this role is that I get to be myself all night long.
I get to be the nice guy who helps people out while singing pretty. The tessitura of this role sits high, there’s tons of coloratura, and vast opportunity for ornaments… right up my alley!

I like comedic roles and so I get to relax into this role without trying too hard. I’ve learned over time how to milk the comedic moments without going overboard (and turning that milk into cheese!).

The beginning of Figaro is the vocal equivalent of being shot out of a canon. Onegin is the exact opposite.

Onegin is a slow boil.

His music is expansive and drawn out, which conveys the exasperated emotions of the character. Onegin has some hard life lessons to learn, and he goes full circle with Tatiana, the love of his life, only to realize her importance when it’s too late.

Because he ends up with even less than he began with, it makes him somewhat of an unlikable character: he drags his loved ones through his selfishness.

In order to get the audience to like him, I focus on the moments of empathy he has for other people. For instance, when he asks Lenksi for forgiveness, or advises Tatiana to not send the letter: he means those things sincerely.

Singing in Russian is an experience in itself, and this opera is the epitome of Russian sentiment and thought. Vocally, it’s high and dramatic, but the biggest challenge is pacing myself and having the stamina to last until the end of the night.

As I said in my last post, Billy Budd’s complexity fascinates me: he encompasses a God, a love, and a hero component all wrapped up in one character.

And you hear it in the music too. For me, the line “Captain Vere, Save Me” is the most powerful moment in the opera. Each time Billy Budd says that line, he begs for his life more and more, and it is soul-wrenching.

The story itself haunts me, and the fact that I get to portray such a pivotal character in justice reform is pretty epic, too. Humbled, I guess, is the feeling I get when it comes to telling this story to an audience.

Billy thinks the world is a good place, and what’s amazing is that when he finds out it’s not true, he still has faith in the world. Britten wrote some challenging music, but he captures the essence of a nautical life and the many vivid characters on board the ship.

The writing for the voice is kept beautiful and light. Riding the edge of sotto voce (staying on the voice while singing softly) is a huge challenge, yet it is tremendously rewarding.

French lyric repertoire is my jam and this role is my favorite among them.

Strictly singing-wise, I love all the baritone roles in the French Lyric repertoire: Valentin from Faust, Zurga from Pearl Fishers, Oreste from Iphigénie en Tauride, and Pelléas from Pelléas et Mélisande, to name a few.

It fits my vocal physique perfectly since my personal tessitura sits high. I love the French language as well for its suppleness and expressiveness.

The musical lines are mellifluous and beautiful. The story of The Pearl Fishers isn’t that compelling but Bizet’s writing pulls in both the performer and the listener.

As I’m writing this post, I’m in the middle of intermission of Don Giovanni at the Semperoper Dresden.

This is another role I do often but still excites me every time I go out onstage.

I love that nobody else is like DG. He’s uniquely forward-thinking. And brash. And crazy… and also unpredictable!

It’s fun to play a character who would kiss or kill you with equal fervor. I get to play a character who is incredibly good at everything he does, but fails at all of it on the last day of his life. It’s the only day where he doesn’t have sex with a woman, and we see his failures on the stage. This is highly entertaining for an audience (and for me!), and they don’t know whether to condone him or feel sorry for him.

For more on my interpretation of this role, check out my previous post: How I Role | My View On Opera’s Bad Boy: Don Giovanni

This list changes for me every few years, as my voice evolves and my perspective on these characters broadens. What fascinates me is the complexity of a character and the lessons they learn throughout an opera.

Nevertheless, what’s most important for me when I perform any role is connecting with the audience and introducing them to a person they wouldn’t normally meet in their everyday lives.