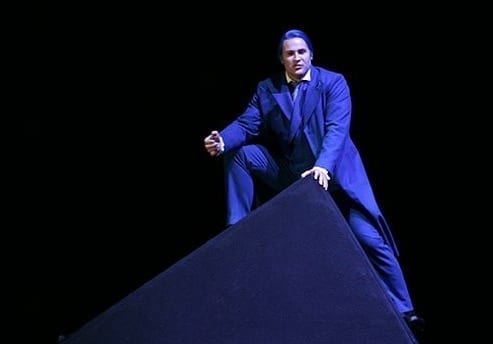 Have you ever had a nightmare where you were on stage and the worst thing ever happened? Well, my nightmare came true with a performance I did of Die tote Stadt in 2010.

This was my second time performing this production by Willy Decker. I did it before in San Francisco so I knew the lay of the land. This time I was in Madrid singing the same double-role of Frank/Fritz—yes, the one who sings the classic baritone aria, “Pierrot’s Tanzlied.” The production is fantastic, one of my favorite’s I’ve ever done, and Korngold’s music is simply transcendent. It’s such a moving opera.

The tenor role of Paul, who is close friends with my character Frank, was sung by Klaus Florian Vogt—a badass tenor. Paul is in deep mourning after his wife dies and Frank supports him through that dark time.

Paul falls into a nightmare at which point he starts to dream that Frank, no longer his friend, becomes his (dead) wife’s lover and begins menacingly teasing Paul. In order to simulate a nightmare sequence on stage, three large black houses begin spinning and twirling one at a time behind the raked stage.

A raked stage is a stage with an upward slant, so the audience can see what’s happening on the stage at a better angle. For this particular set, there was about a 4 foot drop to the actual floor of the real stage where the raked stage ended. So this is where the houses were spinning: on the actual leveled floor, and not at a slant. The entire raked portion of the stage represented Paul’s house where the audience could see everything clearly.

These spinning houses were BIG and in three different sizes at about 10, 12, and 14 feet high, all on wheels. The stage direction required me to ride on the very top of the largest house as it was spinning. Very nightmare-inducing, when coupled with my fear of heights!

The spin was created by two backstage crew members hidden inside the house. They pushed the wheeled house around, following different colored paths laid out on the floor of this stage.

My house, being the biggest and the only one with a man riding it, was the last to arrive. The stagehands would stop the house flush against the raked stage, lock the wheels into place, and I would literally slide down the roof of the house onto the back of Klaus.

He would then carry me downstage piggyback style and fall to the ground, at which point I would straddle him on the floor to taunt him and sing in his face. (He definitely got to skip leg day at the gym after this!)

Sounds hard but we had it down to a science and every night we did it without fail.
Except for this one night…

Not to place blame on anyone that fateful night, but the stagehands forgot to set the brakes on the rolling house I was on top of when it reached the marked spot flush against the rake. So, as I began to slide down the roof of this house, it began to roll backwards away from me and I lost my balance.

My legs were already around Klaus to piggyback him so my body weight pulled both of us off the raked stage onto the stage floor 4 feet below! We came crashing down. Luckily for me Klaus broke my fall. Poor Klaus though!

We stopped singing but we heard the orchestra music continuing on. Literally nobody was visible on the stage anymore.

The fall was bad. I fell straight on top of him and I saw the surprise in his eyes.

“Come on, man, let’s finish the scene!” I quickly said.

Thankfully neither of us were hurt. I stood up, finally visible to the audience from the waist up, then jumped onto the 4 foot stage and reached out to pull him up. We thought ahead and got into our next position according to where the music was and started singing again, like nothing happened.

This lasted 20-30 seconds in reality but to me, at that moment, it felt like an eternity.

We finished the scene and when we got backstage we said to each other, “Can you believe that happened?!” Imagine poor Klaus, waiting there on stage for this guy to piggyback him and with no warning, he gets yanked off stage like that.

Best part is, when intermission rolled around, I went to the conductor’s dressing room to explain what happened to him, and why I didn’t sing pages of music.

I loved working with this conductor. He represented the music on the page so accurately and challenged me as an artist in all the right ways.

I told him, “Maestro, I am so sorry. Can you believe that happened? That was the craziest thing that ever happened to me on stage!”

He looks me dead in the eyes and says, “what are you talking about?”

I said, “I fell off the back of the stage and didn’t sing for like 20 seconds!”

I even saw some people backstage after the show and asked them, “wasn’t that nuts that I fell off the stage like that?!” They said, “that wasn’t the staging? It seemed like part of the show. Just like a nightmare.”

This is just one example that whatever happens on stage, no matter the amount of surprise or shock, you figure out how to fix it, cover it up, and quickly and smoothly execute it.

I like to think that when things go wrong, the fun begins. Yes, you’re in front of thousands of people, but unless you make it obvious, they actually can’t tell that it’s not part of the show. Rolling with the punches prepares one for life on stage because live theatre is unpredictable. That’s why we love it!

Things can go wrong at a moment’s notice. It’s bound to happen but that’s what makes us human.

And most likely, no one will even tell—not even the conductor!