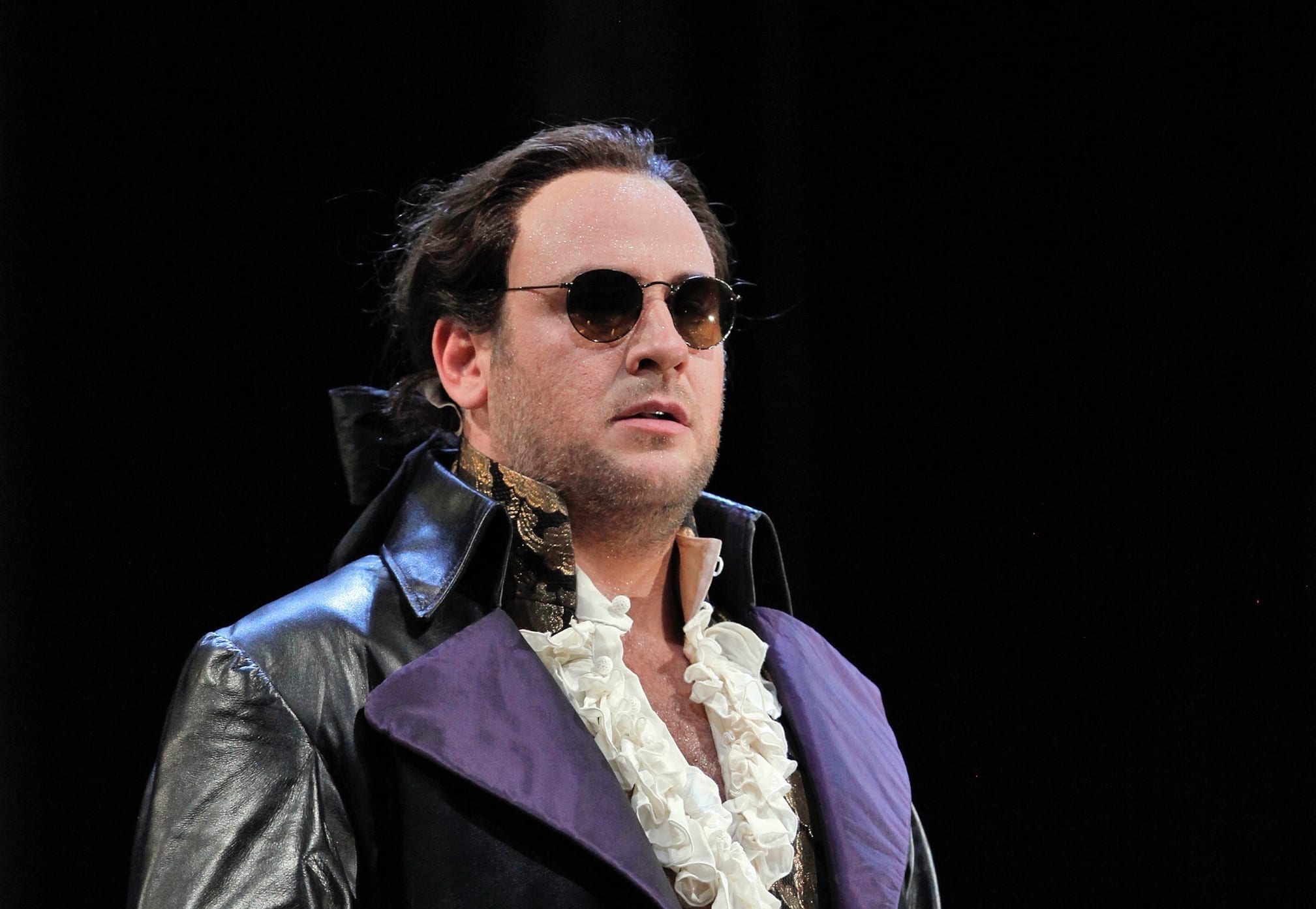 Out of all of my operatic repertoire, Don Giovanni is my most performed role. Everyone loves to hate this guy—even me!—because of his loose morals, reckless behavior, and seemingly unquenchable appetite for women.

It’s definitely fun to play a character that’s so different than me, but the Don’s got his challenges, too. Let’s just say it’s not easy to keep up the reputation of a ladykiller: it’s a little hard out there for a Don.

Don Giovanni is the seducer-in-chief. He’s the ultimate conquistador of women and love. He brags about the many women he’s loved of different ages, backgrounds, sizes, etc., and he truly loves them all.

In the moment that he is seducing someone, he is absolutely enamored by them. But then he quickly changes his focus to another woman, elsewhere down the road. It’s like he goes through a 5-year relationship in 6 hours, which of course leaves behind a trail of broken hearts wherever he goes. He comes out of every situation feeling unfulfilled. As soon as he’s done, he’s off to the next one.

Sai ch’elle per me son necessarie piu del pan che mangio,
piu dell’aria che spiro. E tutto amore… Chi ha una sola e fedele,
verso l’altro e crudele.
You should know that women are a necessity for me,
as much as the bread I eat and air I breathe. It’s all love.
If I’m faithful to one woman, I’m unfaithful to all women.

This line in the opera is quite revealing, and happens to be one of my favorites! The audience actually tends to laugh at this part. When they do, I look straight into their faces and demand to be taken seriously: I mean that line with my whole heart.

As an actor it’s important to truly believe in what you are saying, and mean every word, instead of creating the caricature of what you think a villain should be. But more on that later!

For Don Giovanni, he doesn’t intentionally betray these women. His fix is not the heartbreak: it is the conquest. He truly loves them in that moment and believes that every conquest is rooted in love. He just can’t stop.

Even though the Don spends most of the opera breaking hearts, the audience somehow (strangely enough!) sympathizes with him.

The audience goes through a mix of emotions throughout the opera. Weirdly enough, they secretly root for him at some points.

My take on that?

I think that everyone who is watching has a little bit of the Don in them. Those secret cravings for lust, perversion, or addiction. By not prescribing to any conventions, his life is taboo, and it’s thrilling to watch: his addiction is addicting!

Sex is not naughty for him—it’s his favorite thing, and he thinks everyone should be doing it, especially with him.

Man Of The Enlightenment

I think of Don Giovanni as a man ahead of his time. A man who doesn’t let religion, formality, society, or convention dictate his way of life. He downsizes convention in other people’s lives, too.

For instance, he makes the highly religious Donna Anna drop her facade of being holier than thou, and tempts her. Same thing with Donna Elvira: he makes her relinquish her independence and authority to him. And then there’s Zerlina, the committed bride, who abandons her marital commitments because of the Don’s persuasions.

He makes all three of these women feel like a moment with him lasts for an eternity.

What’s open to discussion for me is whether or not he’s a rapist. My personal opinion is that he didn’t rape Donna Anna and that their sex was consensual. Sometime in the moment (or right after), her guilt pulls her back into her world of convention. She can’t face looking in the mirror and thus accuses Don Giovanni of rape.

It’s wonderful that this part is somewhat ambiguous from the librettist’s point of view, and that it can be left up to interpretation. I have my own opinion, but it’s up to the director to decide.

I think of Don Giovanni as a modern man. He would be better off in Rome with gluttonous appetites, or even now in our free society. Let’s just say… he’d be real busy on Tinder!

In this respect, my Don Giovanni can exist in any production, no matter what time period or setting: he lives outside of place and time.

In my opinion, Donna Elvira is his true soulmate. He spent 3 days with her in Burgas—the longest he’s ever spent with a woman—and he didn’t just pack up and leave in the middle of the night. There were plenty of opportunities for him to run, but something about her made him stay. She knows it and somewhere in his heart, he does, too.

After performing Don Giovanni countless times, I’ve learned that less is more (which is the same thing I’ve learned from every role I’ve done multiple times!).

Even when I debut a role, and know that less is more, I still go a little too far. My problem is that my ideas are sometimes too big for what works on stage.

I used to play him angrier and more quick-tempered, but now I realize that it’s a little scarier when he’s more in control.

The most defining performances of Don Giovanni, in my opinion, bring out the character’s realness.

I’ve got mad respect for both Bryn Terfel and Simon Keenlyside‘s interpretations.

And I’m always proud of my own performances of Don Giovanni because they’re always me. I find a way to stay true to both the character and myself. As a good actor, you have to put yourself in other people’s shoes and think what are they feeling that very moment and really believe it. It’s more than just happy, sad, or angry: you must think about the undercurrents of the piece and who this person is underneath. Peel back those layers and see what’s hiding below. This is what makes it authentic and genuine. All of that mind work is up to the actor.

In regards to the other characters, I feel like I’ve met each of these women in my real life. The libretto is written so well because Da Ponte takes certain flaws from everyday people and internalizes them as stage characters. I assign either people’s faces or emotions from my personal experiences when I’m acting, in order to get a realistic reaction.

I’ve thought through this role many times. At the beginning of each new production, I meet with the director for a thorough discussion of the role, and make my case for each scene’s motivation. If anything conflicts with my ideas, I bring it up with the director and we think of a solution together.

The best directors are those who can walk away from an idea that doesn’t work within a show, even though it may be great on its own. This is good practice for me, too! Sticking to a great idea that doesn’t make sense with the plot defeats the entire concept of this art.

The flames of hell open up, the orchestra digs into their instruments, the chorus ominously enters… the whole thing is just so epic!

I feel like the tag ending version ruins it. I try not to be selfish when making that choice (it’s never mine, always the director’s) but having the opera end at Don Giovanni’s death is so powerful and meaningful to the opera.

Why Am I Laughing?

The genre of this opera is known as dramma giocoso (serious drama coupled with comedy) and there is a lot of dark comedy to Don Giovanni himself.

On the dramma side, the Don is a serious man with very real endeavors to seduce women. He also murders a man, is accused of rape, and is in danger for most of the opera.

However, the giocoso (comedic) element comes into play as well, because this great seducer fails to successfully score with anyone throughout the entire opera. Did y’all notice that?! 3 hours of sexual failures! It’s like he’s lost his mojo. We meet him on the worst day of his life, and his failures are funny to the audience. He even says, “This day. Nothing’s going right.”

My favorite part of the show is the seduction scene with Zerlina. It’s the only scene where Don Giovanni is truly in his element: he lives up to the expectation of seducer and the audience gets to see him at what he does best.

I just let my Don Giovanni run loose in his natural environment. And he almost succeeds! Until Donna Elvira interrupts, yet again.

The easiest part of this role is the singing. There are a few tricky moments, but nothing alarmingly difficult like some of my other roles.

Of course, the oodles of recit has to be on point, and I put a lot of thought into the timing, articulation, and enunciation.

The Legend Lives On

People love this opera because the music is thrilling and the drama is timeless. Also, everyone loves a good villain (especially one we secretly want to be like or be with for a day!).

This is a peculiar role for me because I rarely feel gratified at the end of the show. I feel like I performed well, but I never feel like I nailed it.

Maybe it’s an aspect of Don Giovanni that rubs off on me. Because of his mantra of living moment to moment and never looking back on his decisions, he is so focused on achieving his goal that he never takes the time to reflect.

I hope audience members come away from my Don Giovanni with the idea of taking more chances in life: that they break free from convention. Viva la libertà!

I want them to realize that the reality they’re in may not be what’s best for them.

People change, times change, and you gotta be open to being the best you in whatever form that takes.

0 thoughts on “How I Role | My View On Opera’s Bad Boy: Don Giovanni”