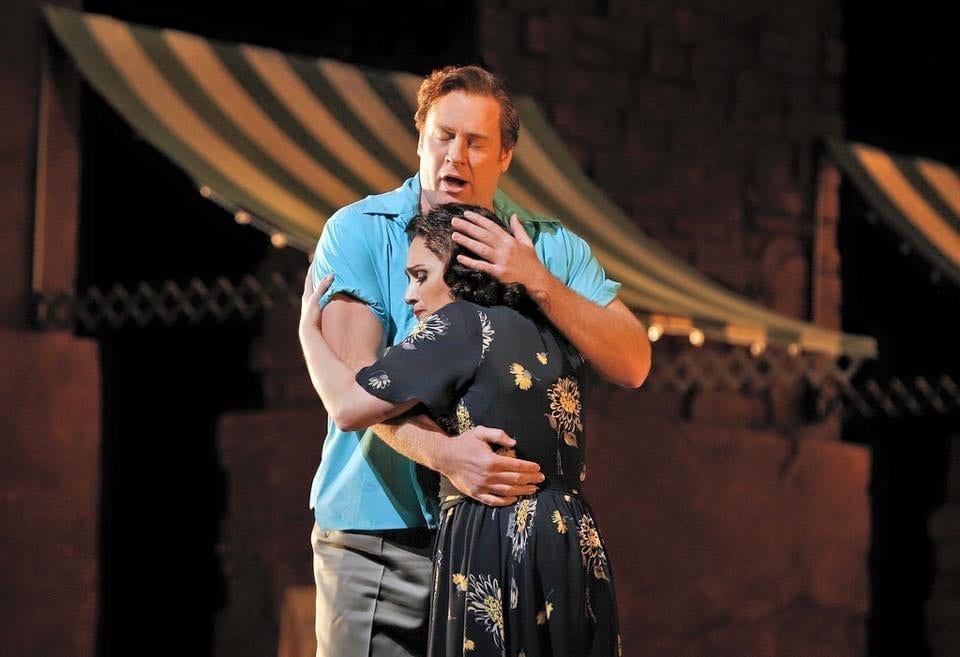 I‘ve performed the role of Don Giovanni more times than I can count. As the Don, I’m expected to become him—no matter how much I may agree or disagree with his character traits. That includes kissing multiple women, touching them, carrying them, and even the occasional spanking.

As obscene as this behavior may be, it’s part of the story and the art form. The story of the Don is a timeless one, no matter how depraved or immoral one may find his actions to be. And yes, there is a way to portray the character accurately while respecting the professionals around me as individuals.

I realize that some young professionals may not know how to properly deal with romantic acting and especially in light of the current times we live in, this is a very important conversation for any young male singer.

Just like stage combat, you must have a conversation with your stage partner about how a romantic scene will play out before you agree on a way to do it. No discussion is too much: communication is key.

When you’re staging a romantic scene and you’re expected to act out something with close, physical contact, like kissing, the best thing to do is ask your partner “how would you like to do this?” or, “how do you feel about this?” These questions really go far and show that you’re there to make them feel comfortable above all else. From the very first day, start with this attitude of compassion and careful attention to your colleague’s comfort level, to set up a respectful working relationship.

From then on, make sure to often use phrases such as “how are you feeling”, or “was that all right?”, in order to make sure you’re never out of line. It is especially important to do this at the beginning of every rehearsal, because your partner might be having a bad day, feeling a little sick, have back problems, or any other issue, and you want to be sensitive to their physical limits.

In rehearsals, I’ve learned over time to not go “all out” with my character or get too carried away just because I am “in the moment.” This matters most during intense physicality with a stage partner (either romantic or combat) because I don’t want to unfairly sweep up my stage partner in “my moment” by going too far. I’m in control of my emotions and I make an effort not to impose my intense physicality onto anyone else.

For example, if I’m asked to grab a woman’s body part in a show, I leave that until we reach the stage in full costume and makeup and we’re running the show. In rehearsals leading up to that day, I’ll either hover my hand over that body part or move my hand just below or aside that area. This indicates to my colleague and the director that I know what to do when but am in fact saving it for later.

The actual grabbing is not necessary for a rehearsal and I can easily pretend to make the motion. I did that once with Patti LuPone and she was very appreciative! I believe her exact words were “what a gentleman” right before telling me to go for it!

Luckily in opera, we mostly wear thick costumes, so when it may be time to grab someone’s body parts, there’s a way to grab their costume instead. And when you’re done grabbing or lifting, don’t linger your hands on them. When I’m done grabbing or carrying someone offstage, I literally stick my hands out straight to avoid touching them any more than necessary.

For kissing in rehearsals, a deep hug while pressing each other’s cheeks together or making a “mwah” sound can easily take place for the actual staged “opera kiss.” It should rarely be practiced off the opera stage and NEVER alone.

One might say that this is “breaking character” to not actually kiss or touch your partner during room rehearsals—personally, I don’t agree with this. I think it’s entirely acceptable to respect the boundaries of your stage partner over developing your character. If your partner tells you they want to practice the full-on kiss before hitting the stage, you have every right to say that you’re uncomfortable with it until that point.

However, if you’ve both discussed the physicality of the scene and have mutually decided to make the sexual action before you hit the stage then it should be fine. I would definitely have this conversation either with or in front of the director.

Actual stage kissing doesn’t normally happen until everyone is onstage in full costume, wigs, and makeup and you are running the show from start to finish.

As a young buck in the opera world, I often felt awkward about kissing. I mean, I think we all are! It’s pretty strange to lock lips with someone you may have just met or might not even like. Imagine you step into your office job and before heading to your cubicle, you say hi to your office mates and kiss them on the lips! It feels a lot like that.

To get over any awkwardness, I think of my character kissing another character, not Lucas (who’s happily married to Irina!) kissing a soprano who has three kids. It’s Don Giovanni kissing Zerlina. Also, the kissing makes more sense for your character when you’re running the whole show, rather than just parts of a scene.

Never just wing a stage kiss in rehearsal. What I mean is, don’t get so “caught up in the moment” that a kiss just happens spontaneously. Again, a respectful conversation must take place beforehand with both partners and the director present.

If there’s any blow-out from your director for not kissing, just say, “I’m sorry, I was just being respectful of my colleague. If it’s okay with my colleague, we can now show you what it looks like.” Always play it safe, my friends.

Also, NO kiss should ever include tongue. TV acting is very different than opera acting and no audience member can see the details of a kiss. That’s why it’s fake. HD broadcasts may be an exception and if you are at that point in your career, then you can make your own mutual decisions (to any HD performers reading the blog, HOLLA!!)

In my recent Met HD Broadcast of La bohème, my romantic stage partner Susanna Phillips and I locked lips for our big kissing moment in Café Momus, which is more than what I normally do. Even though I’ve known Susanna for a long time, we had a clear and professional conversation before this happened. I felt comfortable with her and made the extra effort to make her feel comfortable, too.

Might I add, be considerate with your meal choices: avoid garlic or coffee and carry mints!

1. The Pucker – you lock lips, pucker up but don’t suck, and move your heads slowly and passionately without moving your lips (most realistic one)
2. The Sidemouth – you plant your lips on the corner of each other’s mouth and then move your heads slowly and romantic-like, without any lip motion (most common)
3. The Cheek-to-Cheek – one person turns the other’s head upstage, so you hide the kiss with your body, and then you nuzzle the person by placing each other’s cheeks together
4. The Big Thumbs – the bigger person places the smaller person’s face in their hands, plants their thumbs over their partner’s lips, and then kisses their thumbs (more for aggressive kissing)

Not a Joking Matter

When rehearsing a romantic scene, keep the sexual jokes and sarcasm to a minimum. Sometimes in an attempt to make an awkward situation less awkward, you end up doing the opposite. The situation may feel weird (because it is) but resist the temptation to joke about it because you don’t know what your partner may be feeling.

Even if your partner is cool with jokes, someone else in the rehearsal room may overhear the joke, misinterpret it, and report it to the General Director. Which I think is a shitty thing to do, but I’ve seen it happen.

A lot has changed in the opera world lately, for better and for worse, but your job or someone’s feelings aren’t worth a joke.

I’m not gonna preach why it’s important to respect women because dudes, I’m going to give you the benefit of the doubt and trust that you have learned this vital life lesson. What I will say is that just because you are a man does not mean that you’re not susceptible to unwanted sexual advances, too. You’re not weak for speaking up about something that made you feel taken advantage of, and no job is worth the subjection of your physical comforts.

Young Lucas would have benefited from having had a talk like this one about stage romance. There was a time when a soprano asked me to her dressing room. She told me that she didn’t think our kiss was real enough. She proceeded to make out with me right then and there with full on tongue, alone. I wasn’t really sure what how to feel or what to do. It never happened again but I learned an important lesson that I never wanted to make someone feel the way I did that day. Not to paint myself as any kind of victim, but because our art form is at times sexually provocative, misinterpretations may happen and I don’t want anyone, or myself, to get stuck in the crossfire ever again.

What I’ve learned is to always err on the safe side (see kissing techniques) because even if your partner seems “cool”, you never want to push them out of their comfort zone. Cut back on any overt sexual jokes or behavior, as well as being “touchy-feely” with them when the scene stops. End every physical scene with a compassionate question, like “are you ok?” or “was that all right?” Those quick questions go a long way and make you look like a true professional and a gentleman.

One last thing—if by chance you feel like your partner digs you more than a stage partner and you’re feeling it too, by all means…consent, consent, CONSENT!! And be a classy dude and ask him/her out to dinner before making a move.