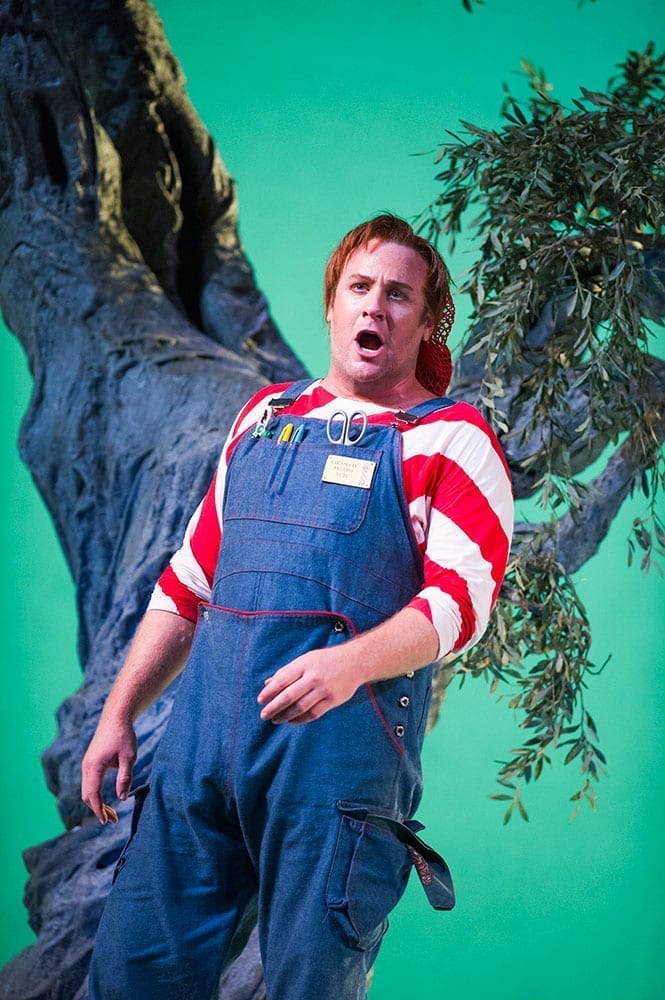 Ever since I started this blog a few months ago, I wanted to write about my wild time at the Royal Opera House where I met one of my heroes, Stephen Fry.

I was in London at the Royal Opera House singing The Barber of Seville. The Barber is a wily guy who handles everything from haircuts to shaves, from bloodletting to matchmaking. In this production by Patrice Caurier and Moshe Leiser, my character enters from the back of the audience. It’s a difficult thing getting from the back of the house onto the stage. I have to walk a lengthy distance in the dark, pretend cutting random audience members’ hair, step over people’s feet in the first row, climb a few tricky steps onto the stage, hit perfect timing with my every move… all while singing the beginning of my aria without sight of a conductor!

Not until opening night did I get to actually practice this extravagance. In the moment, I had to add a few Excuse me‘s and Pardon me‘s, but it all went well. The first row of audience members who I had to cross over were very accommodating. As I strutted through the rows of people, I carried a comb and a pair of scissors with which I’d walk up to some random gentleman and acted out cutting their hair. This got the audience involved in the magic of the story and I loved every minute of it.

By my fourth show, I got the hang of this shtick of rabble-rousing through the crowd. I look to my left, snip-snip my scissors, and act out a quick trim with an audience member. I look over to my right and there’s this random empty row of seats with only one guy sitting in the middle. I instantly recognize the famous British actor and intellect, Stephen Fry. I look at him and, without thinking, blurt out of my mouth, in English, “You’re Stephen Fry!” The audience began to chuckle around us.

I immediately think, “Shoot. I probably shouldn’t have said that.” I duck my head and continue on my path towards the stage. I take one step forward and I hear, “Why, yes, I am.” He instantly became part of the show. Everybody began to chuckle even more. I thought, “When am I going to see Stephen Fry again?” So I took the opportunity.

In character, I went over to him and I leaned on the backs of the seats. I said in my full operatic voice, “I’m a huge fan of yours but I’m right in the middle of something right now. ‘La-la-la-le-ra!'” The audience was cracking up because the timing was perfect and so spontaneous.

I finished the show and one of my cast mates invites me to go out with her and her friend, Stephen Fry! I explain what happened earlier in the show and she goes nuts. We head out to the Ivy Lounge – this private club for cast members of West End shows in London. At the restaurant, I get to the table with my cast mate, Stephen Fry, and randomly enough, Rufus Wainwright. Crazy! I sat down and started talking with Stephen. We laughed about our earlier encounter and I told him how much I respect him. He was so down-to-earth and relaxed – we had a great time.

This was such a unique experience for me because I rarely get to interact with my audience face to face. Especially with that role, I just let mistakes be mistakes, and run with it. That’s what the audience loves the most. They can sense it.

Another great example? This one time when I was singing the same role at the San Francisco Opera, I spontaneously started to fix up Rosina’s (Isabel Leonard) hair during our “Dunque io son” duet. I grabbed a piece of her hair and put it into a better-looking place. She reacted to me by pulling it back into its’ original place. We went back and forth with that piece of hair and the audience cracked up. We tried to replicate it the next time but it was never as funny as the first time.

This goes to show: you’ve got to be open to letting the moment happen on stage (or off stage, as the case was here!). When that spontaneity and realness interplay, it’s ten times better than anything contrived, fake, or over-rehearsed. The audience lives for those magic moments, and so do I.