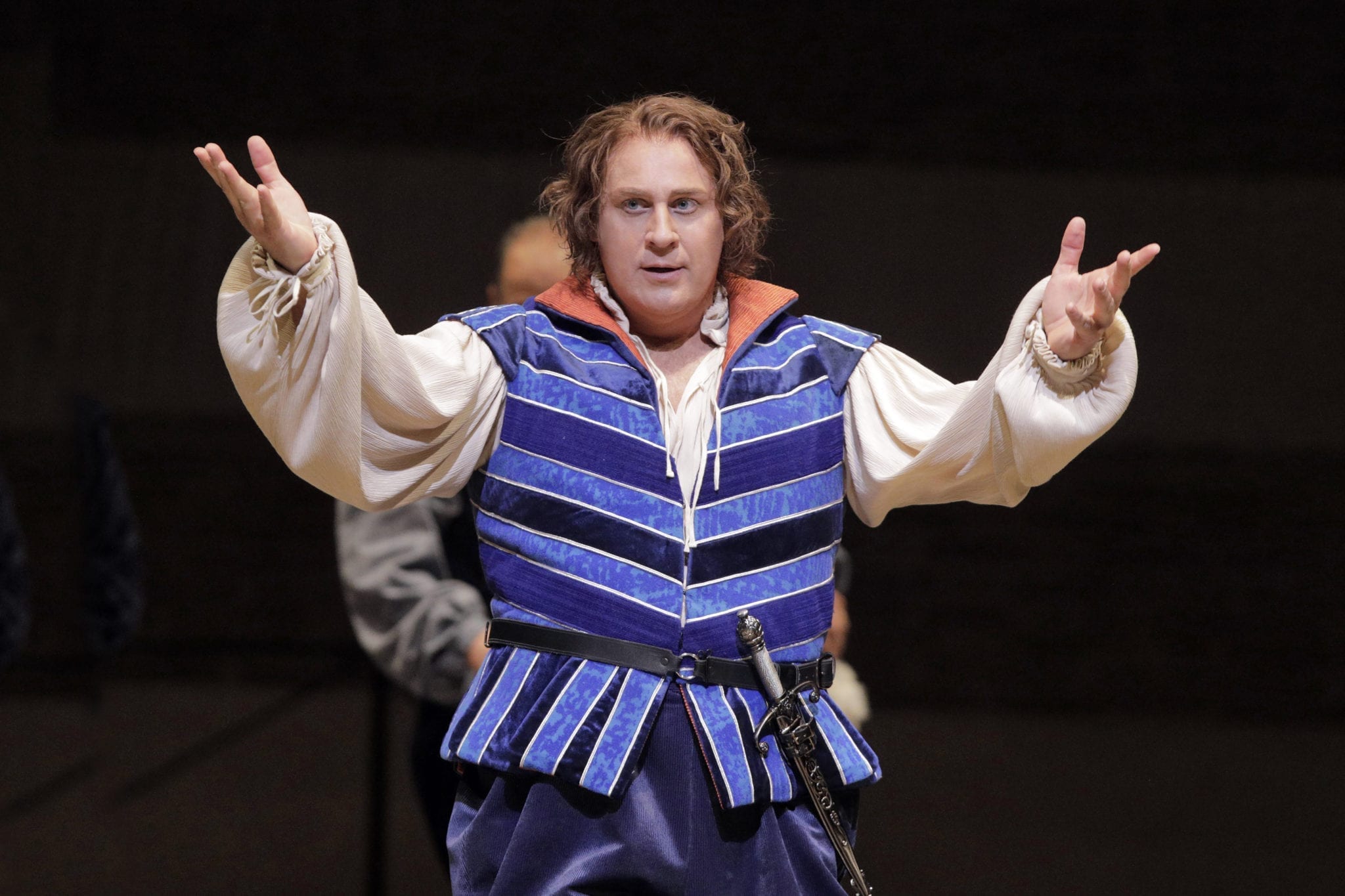 Arias are like gloves: there are lots of different sizes and styles out there but finding the right ones is no easy task. On the bright side, you can switch them out as often as you like as you grow and change as a singer.

Some of these arias were real winners for me during my own auditioning years. In this post, I include arias from my personal audition package as well as other effective audition pieces for different stages of the baritone life.

My big piece of advice when choosing an audition aria: play off your strengths and hide your weaknesses. When auditioning, you’re up for an opportunity, so show the very best of your singing. Work on your weaknesses in the practice room, not in the audition room.

Decide what’s best for you: not every aria suits every baritone. Be honest with yourself and consult with your committee.

So, sorted by language, here are my top 20 baritone audition arias:

Pros: It shows off all the goods: high notes, coloratura, legato lines, passaggio singing, acting, and patter, making it the most virtuosic aria out there for a lyric baritone. If you can sing and sell it well, you very quickly stand out and make a strong impression with that panel.

Cons: It’s so demanding that it’s hard to sing anything after this! Without question, if I sang Largo as my first piece, the panel would ask for something slow like “O du, mein holder Abendstern”. This happened to me so often that I actually flipped the script and began my auditions with a slower piece such as “O du” (more on that one later), since I learned that I would eventually have to sing Largo anyways.

Plus, everyone knows Largo so they have their ideal Figaro already established in their ears. It’s hard to go up against someone’s personal preferences with a prolific character like this!

Pros: The recitativo at the beginning shows it all: style, language, acting, and interpretation. Right off the bat, you demonstrate so much to the panel, unlike most other recitativos. The character is so complex that you come off classy and mature yet unpredictable and defiant—lots of good emotions! It’s not a high tessitura, so that is beneficial to some baritones, yet the coloratura and high note at the end are impressively written.

Cons: The virtuosic ending comes out of nowhere, so your stamina has to also be on point to sing the hardest part at the very end.

Pros: It is a perfect example of bel canto style and long legato singing. For a young baritone, it’s a case study of stylistic singing. It’s decorated with Italian nuances that show off knowledge of the language. The cadenza isn’t too long and the high notes aren’t too high, so this is ideal for when you’re beginning to establish your vocal technique.

Cons: If you don’t understand bel canto style, this weakness is easily detected and can break the whole piece. Interpretation of the score and the text as well as the musical timing are key.

Pros: It’s not a super high sing, but it consists of beautiful phrasing and bel canto style. The comedy is written into the music so there’s no need to go over the top with character interpretation.

Cons: If you have a solid upper register, you don’t get a chance to show it off.

Pros: Even though the character of Schicchi is an old man, this piece did a lot for me as a young singer. I began all my competitions with this because it grabs people’s attention right off the bat and makes them smile. It has high notes, consistent tone, and comedic acting—exactly what young Lucas excelled at.

Cons: It’s not the most impressive aria once you reach a certain level and more repertoire begins to open up for you. Keep in mind that there comes a point when an aria is no longer an optimal fit and you’ve outgrown it.

Pros: For those flirting with Verdi repertoire, this aria is a great choice for one’s first Verdi. This aria is for advanced singers because it introduces long, controlled phrases and breath support. It accesses a higher tessitura along with Verdi’s natural gravitas, while showing knowledge of bel canto style and the utmost poise.

Cons: If you think you might not be ready for it, then you’re not ready for it. Knowing when it’s time to entire this repertoire is the most challenging part of singing it. Don’t rush the process.

Pros: To me, this demonstrates the lyric baritone fach to a tee. It sits in the perfect place for a high lyric baritone and shows off the voice type at its best without overdoing it. I kept this on my audition list throughout the entirety of my audition career. Acting wise, it doesn’t make or break much, so just about anyone can attempt it.

Cons: Setting the correct tempo for the middle section can make or break you in this piece. Nevertheless, every lyric baritone should try this aria.

8. “Votre toast” from Carmen: for baritones and bass-baritones alike

Pros: What a show-stopping piece! You can win a lot of people over with the charm of this suave character. And if you’ve got a knock-down-the-doors kind of timbre, then this aria will show that off well.

Cons: Baritones and bass-baritones sing this aria and the panel may have their preconceived preferences over voice type for this role.

9. “L’orage s’est calme” from Les Pêcheurs de perles: standard but not that standard

Pros: This aria demonstrates the extremes of your dynamic abilities and upper register. The acting challenges of the character’s inner conflict are complex and in my opinion, very advanced theatrically.

Cons: I used this aria a lot back in the day and many people weren’t as familiar with it, which is a strength and a challenge.

Pros: This lightning speed aria demonstrates language, ability, and finesse. For young baritones, it’s a solid first step towards mastering French repertoire because it is not as technically challenging as compared to the other standard French arias. It’s somewhat Poulenc-ish with all of its intricacies, so it’s very well suited for energetic and precise-minded baritones.

Cons: The speed itself is challenging and there aren’t many opportunities for long, legato lines.

Pros: It warms up the voice well and prepares you for anything to come later in the audition. It’s Wagner but the role of Wolfram is accompanied by a very thin orchestral texture (pizzicati strings or harps) so it’s not a heavy role by any means. It shows listeners the beauty of your voice, German language skills, and breath control.

Cons: The panel might prefer a specific voice type for this aria.

Pros: This is all about floating and showing off your high notes. It’s German lieder-like so you can finesse the text and really go for the interpretation.

Cons: The slow tempo can bore the panel if not done with intention and following the indicated tempo changes.

Pros: Your acting chops really take flight with this aria—especially compared to the other two Papageno arias, since it’s not strophic.

Cons: Doesn’t show off the voice well enough but that could be a good thing if you’re a young baritone. And plus, Magic Flute is done all the time!

Pros: It’s very simple and not too demanding. I’d recommend it for young baritones who are starting German repertoire for the first time. I could see this aria used for NATS or something similar, though not for a professional company.

15. Both Onegin Arias: yes, I used both arias for auditions

In my opinion, the second aria is more dramatic and more interesting to me, that’s why I offered it. The first aria is more lyrical and well-known but the second requires more vocal skill. Try both out and see which one speaks to you. Both demonstrate Russian proficiency and style.

16. Robert’s Aria from Iolanta: one of the hardest arias out there

Pros: High notes for days, the tessitura is high, and it repeats, so whatever you did the first time, you have to do it again. Only do it if you’re feeling 100%. It’s not as well-known so it could be very appealing to a panel. You can bring the house down if done correctly in public.

Cons: A proficient accompanist is required since it’s a tricky orchestral part.

Cons: It takes a lot of stamina to make it through the entire aria but the payoff is worth it.

18. “Warm as the Autumn Light” from The Ballad of Baby Doe: my first English aria ever

Pros: This isn’t a high aria but it shows off your timbre and vibrato. If English is your first language, then the diction won’t be a problem (hopefully!). It’s excellent for young baritones in their undergrad.

Cons: Baritones quickly grow out of this piece so be aware of when it’s time to move on.

19. “Look, through the port comes the moonshine astray (Billy in the darbies)” from Billy Budd: the ultimate baritone role

Pros: This aria can plant the seed in a panel’s mind for casting choices if they’re putting on this opera. It shows extreme control with the dynamics and angelic beauty of the voice—just as beautifully as Billy is depicted in the opera.

Cons: Any baritone with a heftier voice may struggle with this aria.

There’s a whole cornucopia of new music out there, so I’m not going to stick to any specific arias. When choosing a new music piece, the composer should be somewhat familiar to the panel—a piece that’s been performed by a C-level house or above (so nothing written by your cousin for your community theatre). The piano accompaniment shouldn’t be overly difficult or complicated, just above a sight-readable level so the pianist can make real music with you. I’ve heard some fantastic new baritone arias but when deciding on one, stick to something that speaks to your heart and means something to you while also demonstrating the best of your abilities.